Highlighted in Table A are key worldwide trends across all aircraft market segments, comparing March and first quarter of 2018 to March and first quarter of 2017. Generally, inventories are down across the board, except for Piston Helicopters! The Business Jet market showed the largest decrease in sale transactions (-3.8%) of all markets reported.

Business Jets showed the largest decrease in for-sale numbers, with 350 fewer jets at the end of the first quarter of 2018 vs. 2017. Piston helicopters were the only segment to show an increase in for-sale numbers (up 13), from 541 in March 2017 to 554 in March 2018. Across all aircraft sectors, there was a total of 5,675, or 10.7% fewer, aircraft for sale in the quarterly comparison, with Business Jets accounting for 51% of the 680 fewer aircraft for sale.

Accordingly, Fleet For Sale Percentages for Business Jets and Business Turboprops are showing the largest decreases of all market sectors in the quarterly comparison, at 9.3% (down 1.9 pts.), and 6.9% (down .9 pt.), respectively.

Table B shows the March-ending changes from 2005 to 2018 for the business jet in-operation fleet, number for sale, percentage for sale, and the year-over-year point change (9.3% less 11.2% equals -1.9 points). March 2016 is the first March-ending period that the percentage for sale and year-over-year points have increased since March 2009 (highlighted in yellow). Interestingly, the March 2018 number of aircraft for sale (2,020) is the lowest number since March 2008.

In 2009, as the recession struck, there was an explosion of 62%—or 1,095—more business jets listed for sale compared to the year prior. What then followed was a seven-year trend toward recovery, as the market steadily shed inventory and moved closer to again being a healthy seller’s market. While this decrease in units for sale is a far cry from the pronounced spike of 2009, Q1 2018 at 9.3% must be regarded as a positive step in the direction of a stabilized inventory for sale. 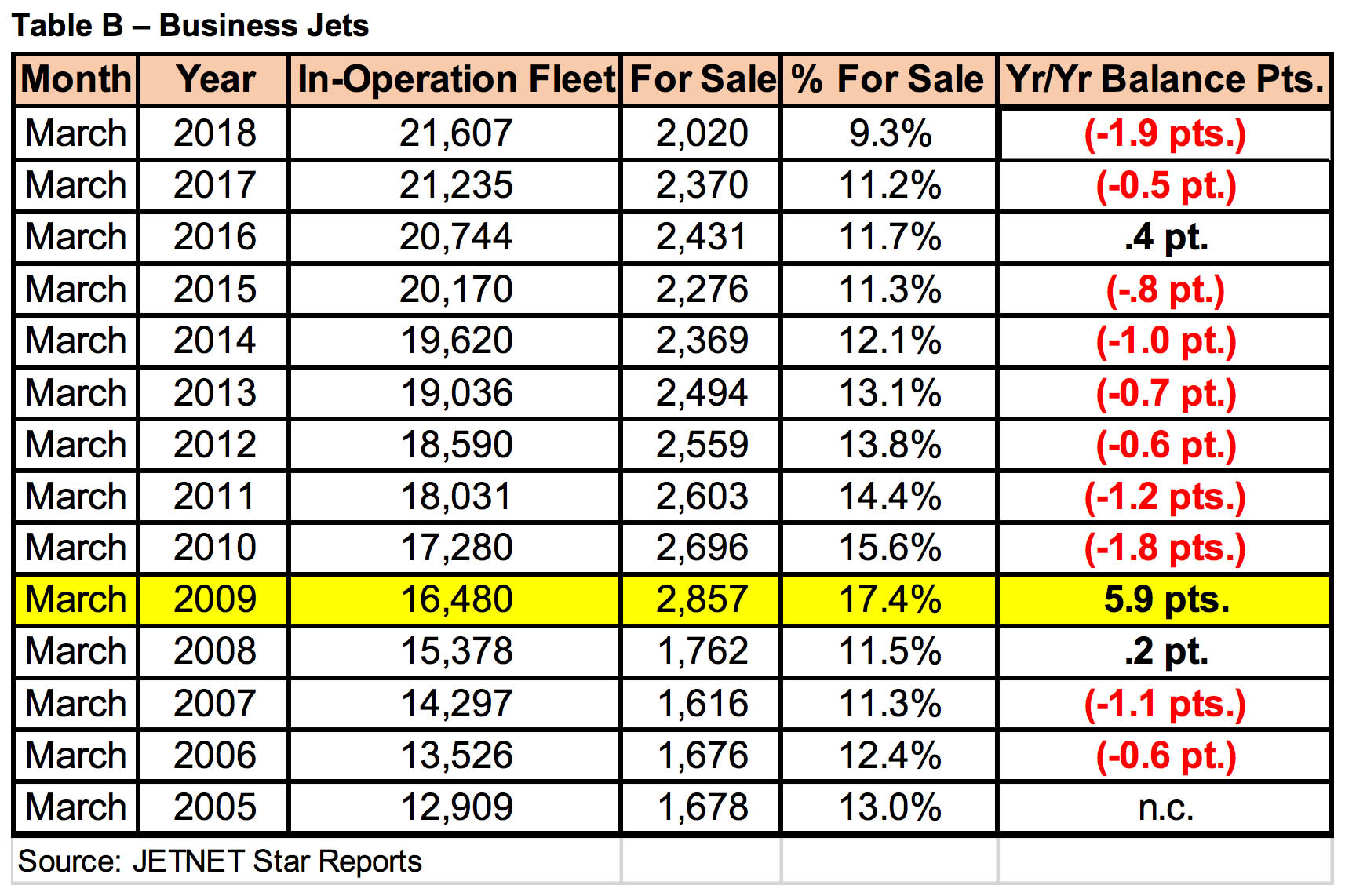 Real gross domestic product—the output of goods and services produced by labor and property located in the United States—increased at an annual rate of 2.3% in the first quarter (that is, from the fourth quarter of 2017 to the first quarter of 2018), according to the “advance” estimate released by the Bureau of Economic Analysis (BEA). In the fourth quarter, real GDP increased 2.9%.

JETNET, celebrating its 30th anniversary as the leading provider of aviation market information, delivers the most comprehensive and reliable business aircraft research to its exclusive clientele of aviation professionals worldwide. JETNET is the ultimate source for information and intelligence on the worldwide business, commercial, and helicopter aircraft fleet and marketplace, comprised of more than 110,000 airframes. Headquartered in its state-of-the-art facility in Utica, NY, JETNET offers comprehensive user-friendly aircraft data via real-time internet access or regular updates.