Highlighted in Table A below are key worldwide trends across all aircraft market segments, comparing September 2019 to September 2018. For the first nine months of 2019 there were 6,402 pre-owned jets and helicopters sold. This is a decrease of 954, or 13% fewer sale transactions compared to 2018 across all market sectors. The Piston Helicopters market was the only one to show an increase, gaining 4, or .6% more used helicopter transactions.

The increase in Business Jets For Sale percentage shows the industry remains below the 10% mark and in a seller’s market. Inventories of pre-owned business jets for sale have increased and are now headed to the 2,200 mark as well, at 2,187 for sale.

Historically, there has been a one-year lag in new business jet deliveries versus pre-owned sale transactions. However, we find ourselves on new ground, as used inventory levels were once correlated with new sales such that most new owners needed to sell their existing aircraft before a new delivery took place. Of course, this is still true, but pre-owned inventory levels are no longer a reliable indicator of new sales. This relationship may no longer hold as true, due to the sharp decline in the realized used aircraft residual values. The price differential of new versus used has made used more attractive. However, most aircraft brokers will explain that the reduction of pre-owned sales in the first 9 months of 2019 is not so much about declining demand as it is about a lack of aircraft to choose from for the discerning buyer at the right price.

This 100% expensing provision is a huge bonus for aircraft owners and operators. After December 31, 2022 the Tax Cuts & Jobs Act decreases the percentage available to depreciate qualified business jets each year, reducing it by 20% annually until December 31, 2026.

Lastly, we are now in the fourth quarter of the ADS-B Out mandate. All U.S. aircraft operated in the U.S. will require this equipage by December 31, 2019 in order to continue to operate their aircraft starting January 1, 2020. Those owners who have not equipped their aircraft with ADS-B Out will find it difficult to find new buyers.

In this market information report, used business jet transactions showed a decline of 352, or 16.9%, after the first 9 months of 2019. Of course, several new business jet models have been certified, and deliveries have taken place over the past several years. These include the Bombardier G7500 (7), Gulfstream G500 (27), Gulfstream G600 (4), Dassault Falcon Jet 8X (49), Textron Cessna Citation Longitude (2), Embraer Praetor 600 (8), Pilatus PC-24 (45), HondaJet (94; Elite 28) and Cirrus SF50 (140). Interestingly, without the inclusion of the new, low-value Cirrus SF50 Single-Engine Jet, 2018 New Business Jet deliveries would have fallen 9 percent. Note: The numbers in parentheses are in-operation, as reported by JETNET as of the end of September 2019.

Real gross domestic product (GDP) increased at an annual rate of 1.9 percent in the third quarter of 2019, according to the “advance” estimate released by the U.S. Bureau of Economic Analysis. In the second quarter, real GDP increased 2.0 percent.

There were 954 (13%) fewer transactions in the first 9 months of 2019 compared to 2018 across all market sectors. This decline has continued since January 2019. It was not expected, as the U.S. GDP increased 3.1 percent in the first quarter of 2019, but that GDP growth slowed in the second and third quarters of 2019 as noted above.

When economic conditions are favorable (3.0 percent U.S. GDP growth or greater), both new and used do well.

Chart A displays the 12-month moving average for full retail transactions for business jets from January 2012 to September 2019.

This decline is only slightly above the low point recorded in December 2016, at 2,531 full sale transactions. Accordingly, 2019 is off to a bad start for the pre-owned business jet market. 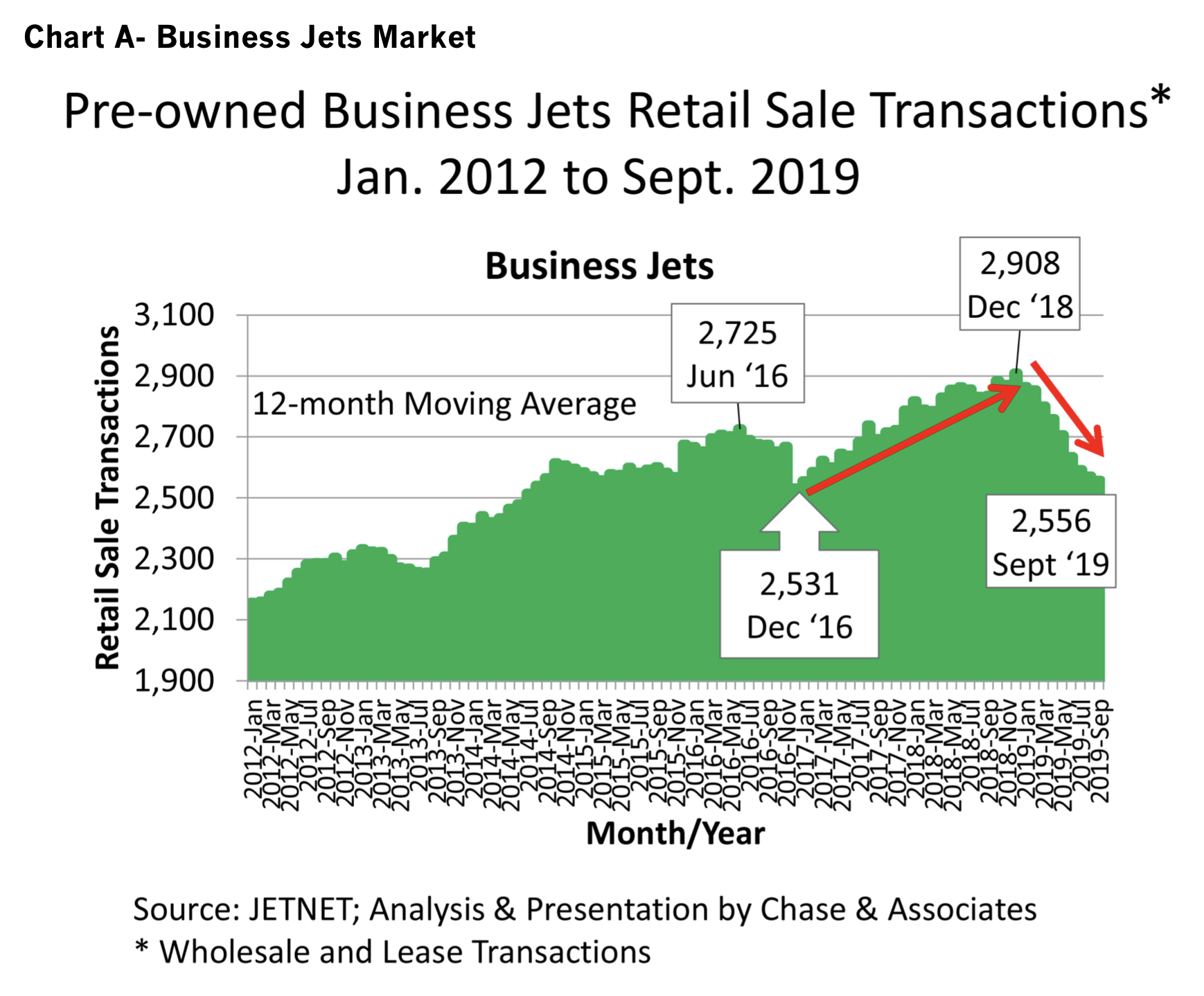 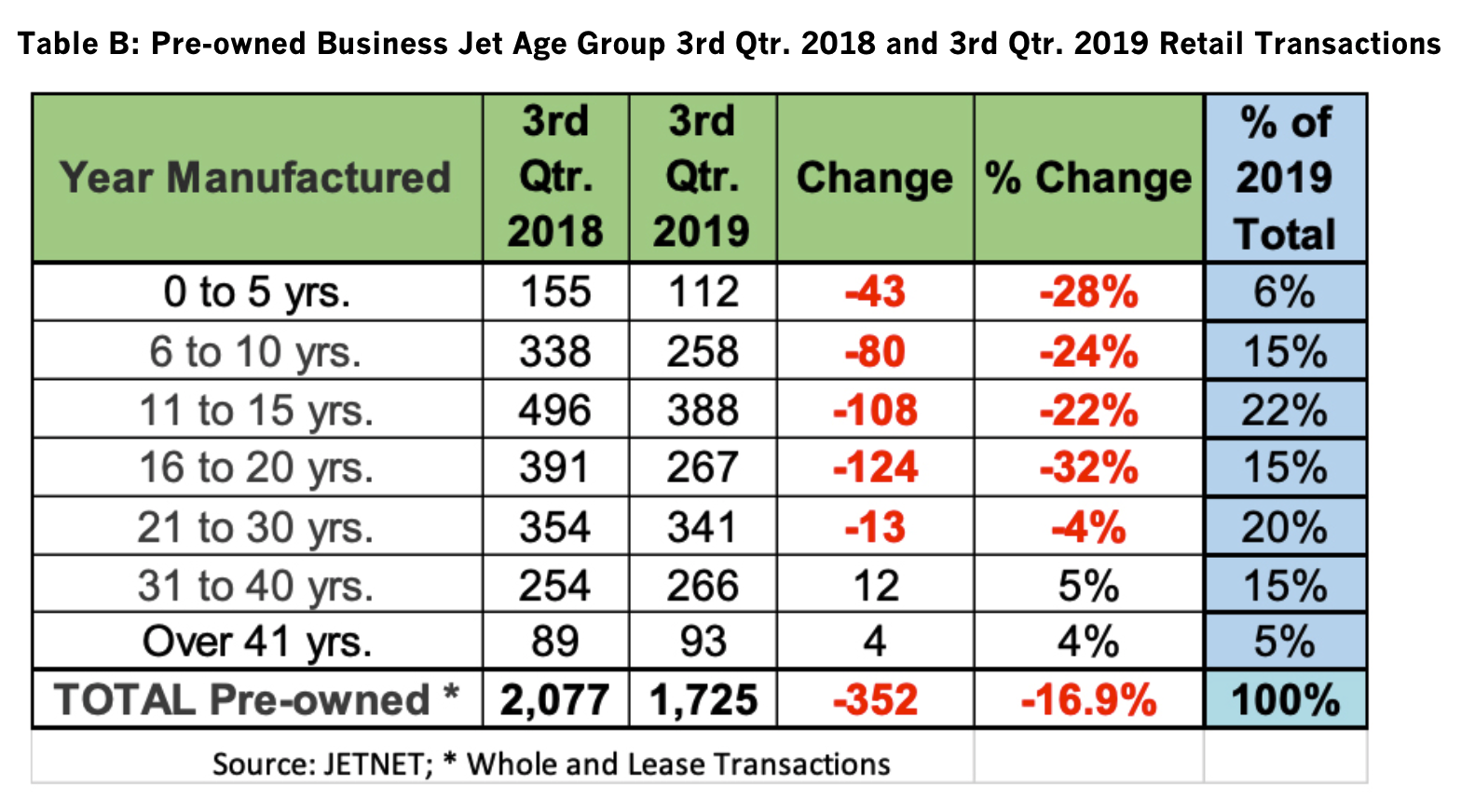 As the leading provider of aviation market information, JETNET delivers the most comprehensive and reliable business aircraft research to its exclusive clientele of aviation professionals worldwide. JETNET is the ultimate source for information and intelligence on the worldwide business, commercial, and helicopter aircraft fleet and marketplace, comprised of more than 113,000 airframes. Headquartered in its state-of-the- art facility in Utica, NY, JETNET offers comprehensive, user-friendly aircraft data via real-time internet access or regular updates.